Kitty Ka Wai Chan, anthropology student from Hong Kong, allowed us to repost her blog about her participation in the summerschool “Visual Ethnography of Cityscapes”. 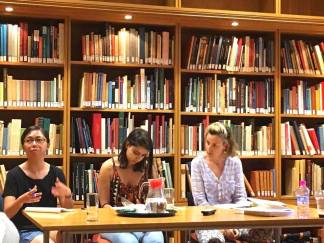 the summer school is ongoing. it is more technical in nature than i expected. due to the lack of prior knowledge and my (still) broken english, my participation in the course and film-making is, well, moderate. i wanna find my passion in this school. kitty, please keep asking questions!!

it’s my second time to conduct field work. the first one is done at a herbal tea shop in hong kong. as i remember, the owner did not really want us to stay  at his shop for the whole week. hardly could we get the permission. and, one point, the owner, i doubt, did not behave “naturally” (such as their family conversation and gathering) because of our presence. however, they were supportive to provide us with information, they even suggest us to take fake photos , like asking our parents to pretend as customers, to fulfill the requirements  (so that we could finish our fieldwork early, i guess). yet,while we were doing the research, the research question needed (should) be reformulated in order to suit the context, and achieve theoretical saturation.

this time we conduct the field work with our camera. on the one hand, visual method indeed records much influx of information at once; on the other hand, there is much more restrictions of filming various place and people. apart from the informants, other people sometimes refused to be filmed, which is understandable and related to the ethics of research. camera, the so-called ethnographic eye, does not only represent the power of researcher, but also a filter which excludes certain data. in addition, how to preform as an anthropologist is also an issue, to hold a camera we need confidence to film the people (which i don’t really have).

Today, we talked about what we learnt from the field work and what ethnographic research is. tough questions. i said sth like how to be myself, if not an anthropologist, in the field. i doubt if it is because of the language barrier or i was too “shy” (in fact i was not sure what i should do, i concerned so much about how other people think). as for ethnographic film/research, i mentioned to know (make sense of) the perspective of informants (well, the so-called natives’ point of view). I should have mentioned, also, the study of interaction between the structure and individuals………. More importantly, ethnographic and anthropological research to me means to get to know the inner world of others in a respectful manner, instead of judging the people (but at the same time need to be critical, or reflective). this is not only related to reflexivity but also relativism. (shit i keep using academic jargon, as one of my friends said about my self introduction)

will i do an anthropology master at uva? i hope so! for the sake of good, which is not merely personal.

glad to announce that i will be going to the nl for a few days NEXT WEEK! yeah!

next part will be focusing on the film, the interpretation of it and its relation with public anthropology, hopefully.