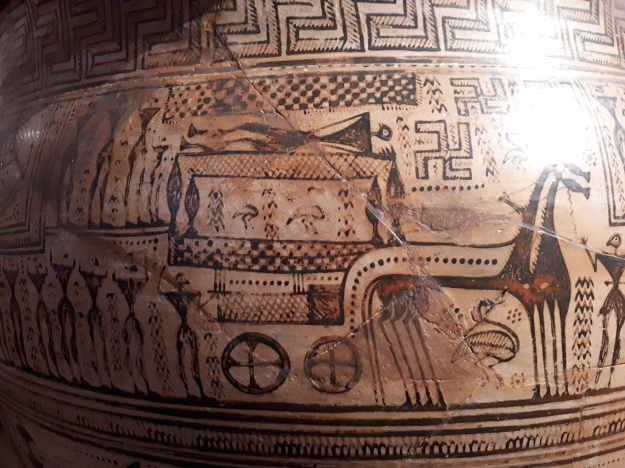 Geometric krater with prothesis of the deceased and mourners.

Anno 2018, people do not particularly identify themselves with their eating and drinking utensils. Leaving my personal attachment to the wine glass and its use in contemporary -regular- drinking rituals out of this discussion, the vessels we use today are rarely more reflective of identity than whether or not their user shops at Ikea. Maybe this is part of the reason that the vases collection of the National Archaeological Museum at Athens seems like a quiet oasis compared to the other museum wings. The collection, located on the second floor, mainly attracts those people with a particular fanaticism in regards of pottery or those who are kindly -yet firmly- directed this way during a school trip, or, as in my own case, Death in the Greek World course.

That this admittedly slightly negative, “not-my-cup (of tea)”-attitude towards pottery is unnecessary, becomes clear as soon as the museum guard turns on the light of the Geometric-period (900-700 BC) exhibition and we come face to face with several giant jars. The vessels, in which we could easily hide some of the smaller members of our group, are decorated with beautiful geometric patterns and what for many of the casual visitors will look like a polonaise of stick figures. But these vases, as well as the vessels of the following centuries, actually have a much deeper story to tell, namely one of life and death.

The impressive large geometric vases for instance, were originally used as funerary markers. In the decoration this use in emphasized, however, at the same time a subtler message regarding the specific roles of men and women was expressed. In a central scene, the first part of the burial process, the prothesis or “laying out of the body” can be found. Around the body the simple figures show a remarkably emotional scene: female mourners grab their heads and even seem to pull out their hair in grief, while the men are more restraint and merely greet the deceased with their swords at their hips. 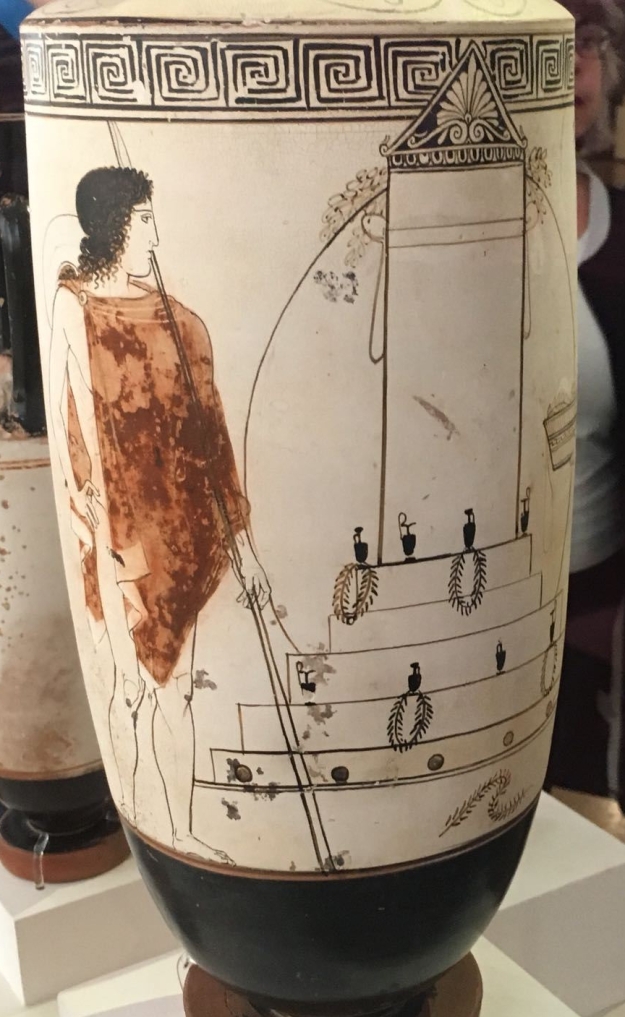 White-ground lekythos with man remembering the deceased at a grave monument.

While in the following centuries the themes on funerary vases were expanded, the special role of women in mourning and burial is one that persists throughout antiquity. Because of the biological mysteries of birth and menstruation, women were regarded as ‘polluted’.  Although it would be extremely unwise to mention this concept to any woman alive today, the “polluted nature” of women was then considered incredibly useful when dealing with another difficult transition: death.  Women prepared the body for burial and openly mourned. Later they were concerned with making offerings to the deceased and maintaining the grave.

By the 5th century BC the raw emotion had disappeared from the funerary depictions on the funerary vessel of the time: the white-ground Lekythos. It seems however unlikely that this reflects a sense of indifference to death. While the vessels show serene scenes of people tending the graves and remembering the deceased, their abundance and professionalism shows that mortuary ritual was booming business. Despite appearances, death was still a “shattering” experience to the living. 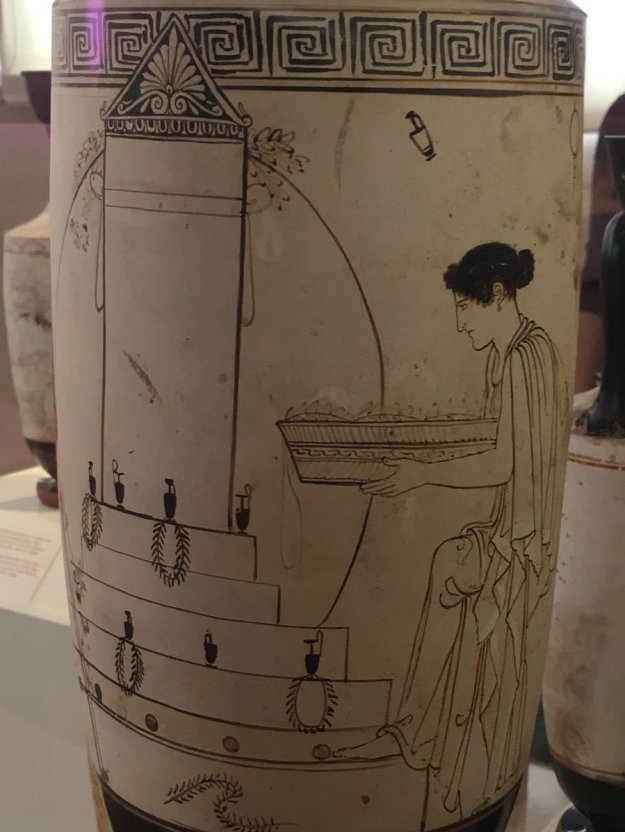 Woman carrying offerings to a funerary monument ( on white-ground lekythos)

1 thought on “Shattered: Death on Pottery”