When entering the National Archaeological Museum of Athens, you will stand face to face with one of the most famous objects of the museum: the so-called Mask of Agamemnon. This golden death mask was found in Mycenae and opens the museum exhibitions, leading into the prehistoric collection. Apart from the prehistoric objects, most of the exhibition rooms focus on sculpture and vases. The museum houses archaeological finds from ancient Greece, from prehistory until late antiquity.

An example of the rich grave goods found in a Mycenaean grave.

Even though I did not think that a prehistoric exhibition would be full with golden objects like death masks, drinking cups and jewellery, this is the largest part of the exhibition. The NAM is proud of their Mycenaean collection and puts in the centre of attention. However, will the many many tourist that stare at the large amounts of gold understand the context of the objects? Will they know, fighting for a spot in front of the showcase, where the objects came from? When it is too crowded to read the information signs, when tourists are not able to read Greek or English, or simply do not want to, the simple display of the objects will not tell them were they are looking at: death. 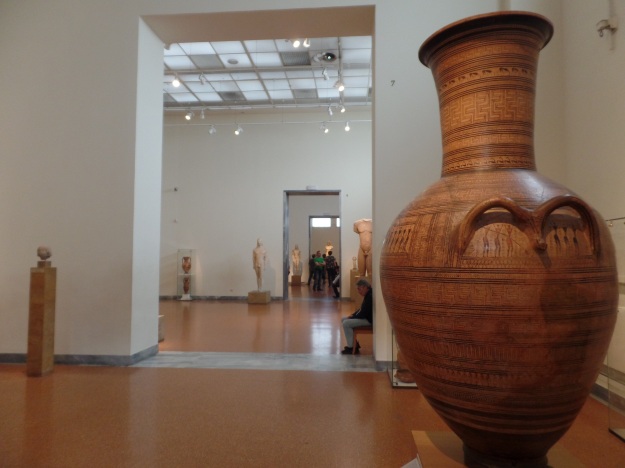 A grave marker – a krater with the depiction of burial rituals on it – starts the sculpture exhibition, kouroi can be seen in the background.

A large part of the objects on display, not only in the Prehistoric collection, but also in the other parts as the sculpture collection, have been found in/by/on top of/surrounding graves. One might even say that the collection of the museum is determined by death. The rich grave goods have often been preserved, together with the architecture of the tomb and the sculptures and reliefs that were placed as grave markers. On the other hand, cities, palaces and settlements have been destroyed, reused or looted and when preserved the objects are often in a lesser state than the ones found in graves. Therefore, it is death that will guide you through the NAM and through the history of ancient Greece. The grave markers will show you the development of ancient Greek art, from static kouroi to the dynamics of the Hellenistic era. While there are many objects on display that have not been found in a grave context, it is death that is most prominent in the objects, but not in the type of museum display and certainly not in the minds of the tourists. Will they realize that they are looking at objects connected to extremely strong emotions, of dramatic changes in peoples in lives? That these objects were made because of the loss of a loved one? 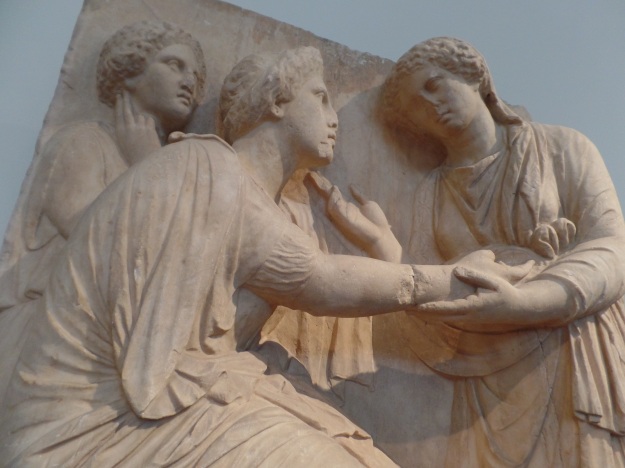