By Francis Koolstra, student Archaeology at the University of Groningen.

“Kókalo, kókalo, kókalo”. This is what I hear someone sing during an archaeological excavation in Greece, earlier this summer. When I ask what the word means, one of the archaeologists points towards a piece of bone which has been exposed: “It is the Greek word for ‘bone’”. It is a reoccurring word in my internship here in Athens, as I am researching the human remains from the Early Mycenaean Northern Cemetery of Ayios Vasilios, Laconia (ca. 1700-1500 BC). The cemetery is of special significance as it is associated with the formative phase of the Ayios Vasilios settlement, which later evolved into the palatial centre of Mycenaean Laconia. The cemetery illustrates the transformation and the diversity of the Early Mycenaean funerary customs, which led to the typical Mycenaean collective funerary rites that find their most dramatic manifestation in the famous grave circles of Mycenae.

My internship focuses on the analysis of human remains which originate from one specific tomb; tomb 21, which is a unique case in the cemetery of Ayios Vasilios. The single built tomb contains multiple articulated and disarticulated internments and already houses more than 25 individuals, which show diverse mortuary customs and treatment, both primary and secondary.

My work in the laboratory is very diverse, and varies from the washing and sorting of the human remains until the estimation of the sex, age, stature and pathology of the individuals in order to reconstruct their osteobiographies. Such data not only tells us something about the final moment of death, but also about the history of the lives of these individuals, which leave traces on the bones which are, in turn, visible by analysing the bone texture and morphology. The results of this research can help us reconstruct past activities, demography, health and diet, but can also illuminate the mortuary rites of the living in order to assess the social meanings. 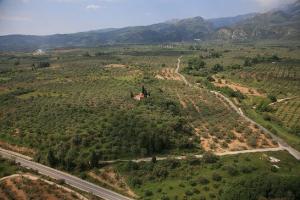